UK Band the Wombats Tap Into Crowd's Energy at the Beachland 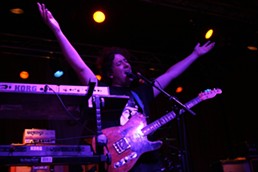 After a couple of songs in last night's set at the Beachland, the Wombats' drummer Dan Haggis looked out at the crowd with a shrug and said, “We’ve been told to say, ‘Go Cavs?’” Patrons erupted with applause, as they did after anything the Wombats said or performed — even though it was the U.K. band’s first time playing a concert in the city, they were already off on the right foot.

During the band’s upbeat set, arms stretched up and bobbed into the air with cell phones held high. Most of the songs came from last year's synth-driven indie pop-oriented Glitterbug. During “Give Me A Try” and “Your Body Is A Weapon” the crowd chanted the anthemic choruses along with singer Matthew Murphy.

After each song, Murphy thanked the crowd profusely as orange stage lights lit up his frizzy hair and made it look as if he had some kind of messy halo above him.

Meanwhile, Haggis cracked jokes from his drumset. “Would you believe I was from the USA if I talked like this all the time?” he asked, imitating an American accent as carefully as he could. It was pretty believable, by the way.

When the band left the stage, its sound manager arrived immediately and tuned all the guitars. An encore was imminent, but the crowd cheered for another song anyway. The Wombats returned to play “Isabel,” “Greek Tragedy” and, of course, “Let’s Dance To Joy Division.” The last song has been their most well-known since its release in 2007, and the band still performed it with explosive energy nine years later. As they ended the song, they repeated the main chorus a few extra times, the crowd singing along as they shouted, “We’re so happy, yes we’re so happy.” It was the perfect way to end a spectacular show.