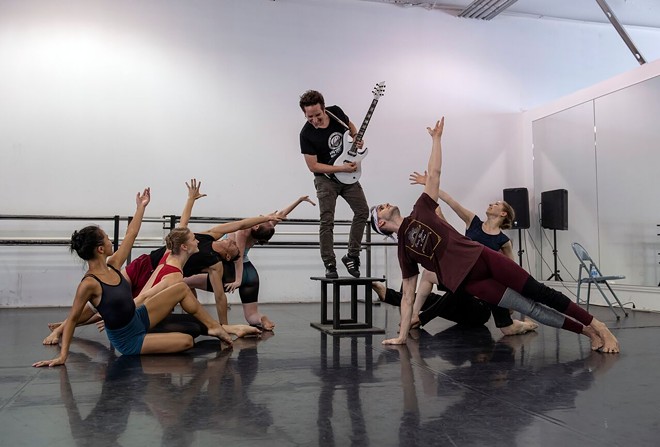 Kolman Rosenberg
Locally based Verb Ballets has just announced that it has commissioned the Adagio Reimagined Project with local rock guitarist Neil Zaza. The Adagio Reimagined Project will honor the legacy of Heinz Poll, a German-born dancer who developed Ohio Ballet into one of America’s most respected chamber dance troupes, while presenting a “bold new reinterpretation of the work.”

Later this month, the company will remount Poll’s Adagio for Two Dancers.
The idea for the project came about when Festival Director Jane Startzman heard Zaza performing a musical interpretation of Albinoni's Adagio in G Minor at the Akron Civic Theatre. She found the reconstructed score breathtaking and was reminded of her time dancing Poll’s Adagio for Two Dancers. Startzman is the regisseur for the work and brought together Zaza and the Producing Artistic Director of Verb Ballets, Dr. Margaret Carlson, to bring with work and music back to the stage.

“This past October, I did this orchestral project One Dark Night at the Akron Civic, and it went really great,” explains Zaza. “We do a few pieces that piqued the interest of Jane. She said, ‘Have you ever thought that people could dance to your music?’ She asked if I would be interested in working with them and I said, ‘Of course.’”

Choreographer Sabatino Verlezza will create the new work the this week to Zaza’s rock score of Albinoni’s Adagio in G Minor. A soloist with the May O’Donnell Dance Company has danced with many other prominent artists. He served as co-artistic director/choreographer of Dancing Wheels and Founder/Artistic Director of Verlezza Dance.

“The piece is one that I’ve done before,” says Zaza. “It’s one of my favorite pieces. We had a meeting with the choreographer. It’s so weird that a rock guy like me is meeting with a choreographer for a concept meeting. I’m excited.”

Verb Ballets is the company with the largest repository of Heinz Poll’s works and the second company to ever perform the original duet since Ohio Ballet. Associate Artistic Director Richard Dickinson danced it under Poll and is helping with the restaging of the work. The Adagio Reimagined Project will be featured on the program at the Heinz Poll Summer Dance Festival that takes place on July 26 and 27 at Forest Lodge Park in Akron.

“I just said no tights and no dancing, but I’m in and I’ll be there performing with them,” says Zaza. “They’re doing the standard dance that Heinz Poll had choreographed. Immediately after, it goes into this heavy rock, big-drum version. They call it a reimagined version so that’s why there’s choreography for it. It should be really cool.”

“Sometimes, you think the interest level will just be blue-haired old ladies, but when you add a modern-day energy and element, it then stretches across different demographics. I saw that with One Dark Night, and I think we’ll see that at the Heinz Poll summer dance show.”

The event will represent the first of what Zaza hopes is many collaborations with Verb Ballets. They’ll perform with him when he restages One Dark Night in the fall.

“That’ll be great because we have some really dark pieces and that’ll add to the production of it, and there’s something else coming next year that is bigger than anything I’ve done yet. I can’t announced the details yet, but Verb will be involved. This upcoming festival will be the first step in our collaborative life.”