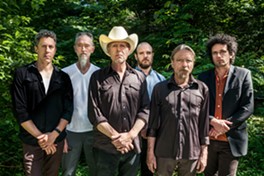 Samantha Marble
Most professional musicians take their art extremely seriously. It kind of comes with the job. For Michael Gira, however, music acts as more than just an art form — it’s a spiritual catalyst that possesses the power to completely turn one’s mental state on its head.

Gira, the 62-year-old creative mastermind and ringleader of the experimental rock group Swans, has devoted his musical career to creating deep and meaningful experiences through both the band’s studio work and their infamously powerful live shows. Preceded by 2012’s The Seer and 2014’s To Be Kind, the group’s latest offering, The Glowing Man, represents the conclusion of a trilogy of sorts — and while it honors the slow burning, groove-oriented structure of those two records, it also expands upon it a bit by bringing a more subdued and down-to-earth vibe.

Creating the vast wealth of material that Swans pour into each studio record can often be a tedious process, especially when it’s all so well-orchestrated. Gira is aware that the prospect of even writing songs that often surpass the 20-minute mark sounds crazy, but as maddening as his methods may be he insists that it’s all worth it.

“It’s just a gradual process of adding way too much sound to the tape, the recording medium, and then eventually scraping it away again until it makes some kind of logical sense,” he explains in a phone interview. “Putting all that together, and re-editing, and figuring out the sequence and how one song affects another, and how it can seduce you into the world that music is creating.”

Gira has always enjoyed looking at things from an elevated point of view, as evidenced by the length of his most celebrated material. This can be tied to the way he and his band often find creative inspiration in a live setting, through continual improvisation and “pursuing the sound,” as he likes to put it.

Oftentimes, after reaching a breakthrough during a performance, the band keeps revisiting the same musical theme it discovered over and over until it eventually becomes a new song. This is how most of Swans’ more expansive material is written.

“‘Cloud of Forgetting,’ ‘Cloud of Unknowing,’ ‘Frankie M,’ and ‘The Glowing Man’ [on the new record] — those were performed over the course of 16, 18 months, live,” Gira says. “They just morphed into the general shape you hear on the record.”

Of course, the five musicians that make up the rest of the band deserve a lot of credit for conducting this whole process, as well. Ever-grateful for what he calls “the most fruitful collaborative effort that I’ve been involved in,” Gira quickly praises the other members of Swans.

“This band has been remarkable … it’s kind of one body. Six people comprising one body. It’s very intuitive,” he raves.

This, too, can be tied back to Swans’ live performances, as the excellent artistic and personal chemistry band members have with one another allows them to further break down any barriers that may exist between them while playing together. It’s all about finding “the path,” as Gira describes it — losing oneself inside the cathedral of sound the band creates in order to encourage the music to reach deeper and deeper levels of the subconscious. It’s a magical, otherworldly thing to be a part of, and it’s the reason why Swans usually play for hours on end as loud and hard as they possibly can.

“When the sound live is working — it doesn’t always work — but when it’s really working it’s like you’re almost unconscious,” says Gira. “We’re just as much inside it as the audience, and just as surprised as the audience might be … Once it reaches an epiphany, to me it’s the closest I come to some kind of spiritual experience.”

The band pushes and pushes toward this revelatory feeling obsessively, trying to get the most out of every ounce of the material and often wearing themselves out physically in the process — in fact, according to Gira they had to cut down the amount of time they spent on stage from three hours to around two and a half in order to conserve energy while on tour. As exhausting as it may be, if the tone in Gira’s voice when he talks about it is any indication, it’s more than worth it.

Currently on tour in support of The Glowing Man, Swans will bring this beautifully loud sonic spectacle to Beachland Ballroom on July 18. Fans of the current iteration of the band, which formed in 2010 after Gira set the project aside 13 years prior, may be particularly interested in seeing them this time around as it was recently announced that they’ll officially disband after this tour. Swans name will continue on with Gira at the helm — it’s hard to imagine him ever retiring it for good — but the five musicians with whom he has such a good creative relationship will no longer be a part of it. The “most fruitful collaborative effort” is coming to an end.

“The way I’m gonna proceed in the future is continue to use the name Swans but have a revolving cast of contributors, and see what that can produce,” he says. “I’ve got to kind of step back from it for a bit. The other fellows have other things they want to pursue, which makes sense, and we want to give it a final thrust and then let it go.”

In typical Michael Gira fashion, he’s once again pushing away the familiar to create something new and uncomfortable and undoubtedly inspiring.

“I’m not quite certain what’s gonna happen, but I think that’s where I need to be right now, in a place of uncertainty, even fear,” says Gira. “I don’t think comfort is good. It may fail abjectly, but so what?”