Esperanza Spalding, We Are Scientists, Matt Costa, And More 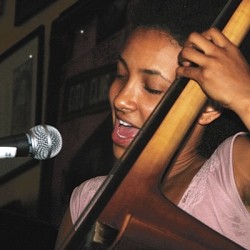 During an interview prior to this show, singer-bassist Esperanza Spalding warned me that her recent self-titled album is the "safe-listening version" of what her band does live. Her concert to a sold-out house at Nighttown proved she wasn't just tossing around empty threats. Opening with "Jazz (Ain't Nothin' but Soul)," a tune popularized by Betty Carter, was more than appropriate. The song, with its repeated line, "jazz - it's the voice of my people," typifies Spalding's approach, as she managed not only to tether herself to the music's heritage, but, in the same moment, also installed herself as a primary voice that'll propel the genre forward.

While her bass was lost in the mix at times during the initial set, Spalding nevertheless felt every note, springing and swaying in a fitful dance. Her vocals, less sweet than on her record and tinged with a desperation not at one with her "wonder girl" marketing, fired from her throat, as if her hands were busy plucking her vocal chords - so connected was her singing to the playing of her bass. She was at times playful, her head wagging back and forth like a dancer from Charlie Brown's Christmas special, just before plunging to the depths of human trouble, her neck snapped back, eyes clenched, jaws stretched to loose a woeful moan. It was a copy of the wailing Billie Holiday you see on T-shirts and posters. Spalding played the expected numbers from her album: "Body and Soul," "I Know You Know," "Precious" (the latter introduced as a somewhat failed attempt at producing a pop hit). But the songs gained musical grit in the live setting. With space to improvise, her band - pianist Leo Genovese and drummer Otis Brown retained from the record, with newcomer Ricardo Vogt on guitar - took the songs beyond the veneer of their studio production, even roughing the edges to Spalding's lyrics, which can lose their substance with repeated playings. "I'm not going away," Spalding sang at the end of "I Know You Know" late in the second set. Soon after, she cleared the stage of her fellow musicians for a riveting vocals-and-bass take on "Midnight Sun." The night was over, but it was clear Spalding's not going away anytime soon.

Lanky singer-songwriter Matt Costa walked onto the stage looking like a young boy who forgot to brush his hair for the fourth day in a row. But once he strapped on a guitar, all the aforementioned awkwardness melted away. In performance mode, Costa is completely immersed in his craft, feeling the music so much he seems to forget where he is and what he's doing. He's a romantic. Not in the sense of romance itself, but in the way he dissects the world around him and pieces it back together through song.

The California native recently released Unfamiliar Faces, which he says represents the fact that the same person can put on a different face everyday. Similar to that idea, every song performed on Thursday night displayed a different feeling (or face). He was able to transition between moods easily by switching from one genre to the next. Costa and his band shifted from sugary pop ("Cold December") to a beautiful ballad with cascading keys and gentle finger-picking ("Vienna"), and then changed speed yet again with an upbeat country hoedown ("Miss Magnolia") that had even a bearded, 250-pound dude in the crowd bouncing up and down.

The 25-year-old Costa has played huge arenas, opening for Jack Johnson, and has shared the stage with some big-deal musicians at festivals like Lollapalooza. (Pretty good for a guy who started writing music at 19, after a skateboarding accident shattered his leg along with his chances of going pro.) Yet the small venue suited him well, letting him mesmerize fans just a few feet away. When he wasn't strumming away, Costa was bouncing on the keyboard or making smart remarks (when guitar feedback made fans cringe, he sauntered up to the mic and said, "'Scuse me" like he was a preteen who accidentally farted in class). With a charm that was hard to resist and an electrifying stage presence, Costa had the crowd in a spell the whole time. - Danielle Sills

Soundtrack to Your Summer Tour

At 19 years old, I've never felt old. All it took though was a crowd of shrieking teenagers to make me feel my age. Clad in jelly bracelets and pristine Chuck Taylors, the audience members - some so young their parents had accompanied them - were nothing short of jubilant that they were watching the Maine, Metro Station, Good Charlotte and Boys Like Girls. And I was right there with them. Since I never got to see Good Charlotte before, I got to live out my 15-year-old fantasy.

Opening band the Maine started out by playing "Simon Says" with the audience. Every time lead singer John O'Callaghan told audience members to scream or throw their arms up, they did. When O'Callaghan motioned toward Lake Erie and said, "Let's go jump in this pond or whatever," the audience would have, if the Maine led the way. The band's set of upbeat, goofy pop songs got the crowd moving, from the tongue-in-cheek "Everything I Ask For" to "The Way We Talk," which sounds eerily reminiscent of Cute Is What We Aim For. After the Maine warmed the audience up, Metro Station started a massive dance party as singer-guitarist Trace Cyrus shouted, "Everyone fucking dance!" Whether they were playing the radio hit "Shake It" or any of the other songs from the band's self-titled debut, the audience didn't stop moving.

I had my doubts when Good Charlotte took the stage. After hearing songs off its latest album, I wasn't looking forward to a set about clubbing and fashion labels. Fortunately, the band focused on songs from The Young and the Hopeless, the sophomore record that put Good Charlotte in the mainstream and brought it thousands of fans (including me). Everyone welcomed older hits like "The Anthem" and "Girls & Boys," proving most people liked the band better when it was "young and hopeless." Every teenager's new favorite band, Boys Like Girls, closed the night with a set full of crazy lights and a batch of pop-rock songs that would have made a perfect soundtrack to anyone's summer. As the band ended with its hit "The Great Escape," fans were still screaming and jumping like they were in the presence of gods. It was enough to make every 15-year-old's fantasy, including mine. - Brittany Moseley

We Are Scientists pulled in to the Grog Shop on Saturday night looking and sounding more robust than the incarnation of the band that played there three years ago. The band still revolves around bassist Chris Cain and singer-guitarist Keith Murray - but now it's got a keyboardist to fill up the sound. And speaking of Cain and Murray - while they're certainly dressing a bit more maturely these days (Cain didn't don his prescription sport goggles at this show), they still spent plenty of time goofing around. Murray cracked jokes, both onstage and off, during Oxford Collapse's opening set. During their own set, when the Scientists weren't extolling the virtues of being an "indie" band on a major label, they were ripping on the mellow sounds of the Shins. The one subject they failed to address was the fact that - despite their solid catalog of songs - they haven't found much success in America. They've achieved a modicum of success in the U.K. - With Love and Squalor went gold there, and Brain Thrust Mastery is well on its way too. But because those records haven't done much here, there's the lingering feeling - such as when Cain introduced "That's What Counts" as "the song we'll be remembered for" - that the band just might be on borrowed time.

But that vibe didn't really resonate throughout any of the band's 14-song set, which began with a white-hot version of "Impatience," followed by a torrid "Nobody Move, Nobody Get Hurt." "Altered Beast," "Cash Cow" and "Lousy Reputation" followed, as did a rendition of the band's latest U.K. single, "Chick Lit." The group was then joined by Oxford Collapse for a raucous version of "After Hours." As per the legendary showbiz rule, We Are Scientists indeed saved the best material for last. The aforementioned "That's What Counts" was - as Cain, perhaps self-deprecatingly, acknowledged - a slice of '80s-inspired rock for which the band should be remembered. And so was the tune that followed it, "Lethal Enforcer." The band closed the show with fan-favorite "The Great Escape." - Jeremy Willets