Update: Last week's incident involving a 911 call for a supposed "ISIS supporter" at a hotel in Avon has now become an international incident of sorts. That's because it wasn't an ISIS supporter at all but just an Arabic businessman in traditional garb. That man's name is Ahmed Al Menhali and he's from the United Arab Emirates. Police body cam video of the incident (which you can watch below) shows officers with assault weapons handcuffing and searching Menhali at the Fairfield Inn and Suites.

Avon mayor Bryan Jensen released this statement on Sunday, one week after the incident. 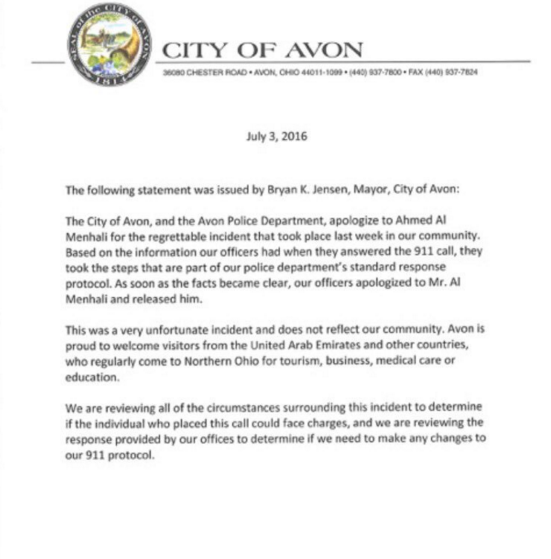 The UAE embassy issued its own statement as well.

"Since learning of the regrettable situation that took place in Avon, Ohio last week, the UAE Embassy has been in close contact with Mr. Al Menhali and his family.

"Ambassador Al Otaiba discussed the situation with Avon's Mayor, and urged a swift apology and response from all of those involved, including the local police. Mayor Jensen and Avon's Police Chief subsequently met with Mr. Al Menhali to apologize for the incident.

(Original story 6/30/16): Avon police were called to the Fairfield Inn and Suites yesterday after a woman reported a man "in full head dress with multiple disposable phones pledging his allegiance to ISIS" in the hotel lobby. Officers arrived to find the man speaking Arabic and wearing a long white robe.

And so the police officers drew their guns and ordered the man to get on the ground. He was handcuffed and searched, though no weapons were found.

The hotel desk clerk who initially prompted the 9-1-1 calls later told officers that the man hadn't mentioned ISIS at all. It's unclear what exactly happened, but, to some degree, the clerk panicked, and her sister and father called the police on her behalf and ascribed an ISIS connection to the situation.

During the encounter, however, the man collapsed. He was treated by medics and taken to St. John West Shore.

Avon police are still investigating this incident.  The department has formally apologized, and the man has retained a civil rights attorney.

In the meantime, though, the United Arab Emirates, from which this man hails, “has warned its citizens to avoid wearing traditional garments when traveling abroad,” according to a recent Associated Press report.