The Jam Scene Spotlight Shines Brightly on Goose, That Funky Four-Piece Band Out of Connecticut 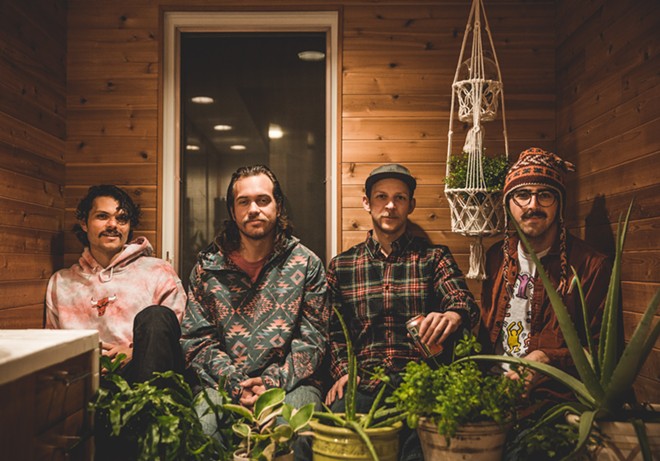 Whether the levee broke last summer at the Peach Festival in Scranton, Pa., remains a point of debate. However you want to look at it, though, things changed on that late July afternoon. There they were, Goose, under auspicious sunlight, performing to a crowd of thousands.

Not to put too fine a point on it, but you could see the signs of Goose’s rise in digital word-of-mouth very clearly around that time. It was a hell of a thing to watch: the link-sharing of live shows, the excitable comments on other bands’ message boards (“Goose is an amazing band,” ca. Aug. 13), the chatter over vape carts outside venues from coast to coast. The buzz around this funky band from the Northeast absolutely exploded toward the end of the 2019 festival season. Ever since, it seems like you can’t share a donut with someone in the jam scene without them trying to turn you onto Goose.

Everything just seemed to click, suddenly, without warning, at the Peach gig. Guitarist Rick Mitarotonda was sitting down onstage, his left knee wrapped in a brace, and the visual incongruity somehow magnifies the situation in retrospect. The musicians had sprouted quadruplet mustaches for the summer. It's a memorable look.

They slotted both a Dead song and a well-timed Bruce Hornsby hit into the set and navigated between older tunes (“Arcadia,” a highlight) and newer tunes that would soon top their Spotify page (“Wysteria Lane”). The band—Peter Ansbach on keys and guitar, Trevor Weeks on bass, Ben Atkind on drums, with Mitarotonda rounding out the stage—memorializes the show thus on their Bandcamp page: “This was a very special show! A huge crowd of rowdy funky flockers in attendance having a great time!!” Wherever you stand on the Goose train, that much can’t be denied.

From the band’s fall tour through their current set of dates in the winter and spring of 2020, they’ve been selling out dates left and right.

Goose returns to Cleveland March 5 at the Agora. They’ll be opening for Pigeons Playing Ping Pong, providing an avian theme to the tour if you’re into that trip, and the energy shows no signs of slowing. Back in December, the band performed their annual Goosemas show in Norwalk, Conn., another sold-out show that featured a dazzling setlist of yuletide classics, latter-era Goose crowd-pleasers and a spaced-out take on “Tomorrow Never Knows,” because whythehellnot. Their setlists spin like kaleidoscopes, tilting into early material, clever covers and newly written originals.

Not too long before the band’s sudden fireworks display, they were gigging around hilly Wilton, Conn., and slinging bar shows to crowds of a dozen or so. There’s no way to work around that stage of a young band’s development without diving in and spending long nights cutting your teeth. The sweat equity began to build into something greater than the sum of its parts.

In early 2016, a different incarnation of the band released Moon Cabin, a finely wrought psychedelic jazz-folk album that showcased Mitarotonda’s airy vocals and an ensemble that was clearly devoted to inventive songwriting and the patience required to develop a singular voice as a band.

Anspach joined the team at the end of 2017, the final piece in a series of lineup changes, right as Goose was waiting to hear back about opening a seven-show run for Spafford. He’d been playing guitar in Great Blue, a power trio from the same neck of the woods. The thing was, Anspach needed to learn how to play keys first. He quickly took care of business, and Goose hit the road. At the fourth show on their run together, the bands were playing a sold-out show in Detroit, and that’s when the reality of the matter really sunk in for the new guy on the keyboard.

“That was an insane experience,” he says. “It felt like I was being cast into the fire. It made it that much more fun.”


Now, in early 2020, the band has two projects in front of them. One is a full-length album that was written as a follow-up to Moon Cabin, a project into which the band has been blending Anspach over the past two years.

The other project’s roots can be found on the string of singles Goose started releasing in 2019. There’s a method to how they’re releasing these songs, Anspach says, a predetermined order. But as far as the actual practice of recording these tunes, some interesting connections have arisen. Goose recorded “Butter Rum” at a studio in Colorado, which called back Mitarotonda’s time living in Fort Collins and performing that song with his previous band (Vasudo). Each single features artwork by Jason Piperberg. (The band hit a studio in Los Angeles Feb. 11 to record the next single. Keep an eye out for that one soon.)

At the Peach Fest show last year, the band played “Time to Flee,” an Ansbach-written number that traces the introspection found inside a sudden breakup with a significant other. It’s a straightforward theme tackled by countless musicians before him, but, here, in Goose, the sentiment transforms into a funky elevator metaphor and a rhyme scheme that’s catchy as all get-out. A jaunty melody winds through the song, punctuated during the chorus with snappy percussion and a head-bobbing vamp. The interplay among the four musicians is impeccable, and the Peach Fest version gives way to a keys-led jam that shows off the guys’ ability to let it rip onstage, far off from the main structure of a particular song.

“Instantly, stuff will start to happen that's pretty unusual,” Anspach says of the band’s forays into the improvisation. “As long as we're listening, we're probably not going to fall on our faces.”

This spring, the shows with Pigeons Playing Ping Pong are another feather in their cap. Goose’s 2019 set at Dome Fest, a festival hosted by Pigeons in West Virginia, was another turning point for the band in their headlong dash across the past 12 months of jamming.

“It's really cool,” Anspach says. “They have an incredible fan base that's been super welcoming to us.”

Goose’s shooting star is a humble phenomenon to watch. From where we're standing now, it seems like there's nowhere to go but up—further into the cosmos, wherever their will takes them.